“Organic Agriculture is a production system that sustains the health of soils, ecosystems and people. It relies on ecological processes, biodiversity and cycles adapted to local conditions, rather than the use of inputs with adverse effects. Organic Agriculture combines tradition, innovation and science to benefit the shared environment and promote fair relationships and a good quality of life for all involved” (IFOAM definition). 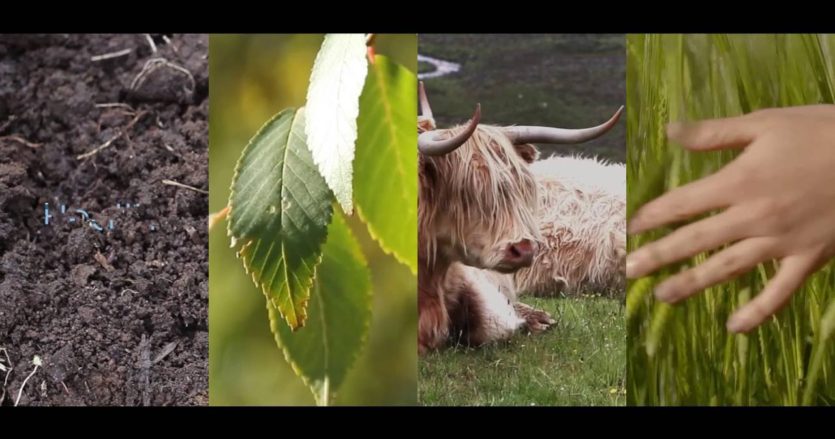 The beginning of organic farming could trace back to 1924 in Germany with Rudolf Steiner’s course on Social Scientiﬁc Basis of Agricultural Development, in which this theory considered the human being as part and parcel of a cosmic equilibrium that one must understand in order to live in harmony with the environment. Therefore, a balance must be struck between the spiritual and material side of life (Herrman and Plakolm, 1991).

Sir Albert Howard was the founder of the organic farming movement. His book An Agricultural Testament summarized his research works of 25 years at Indore in India, where he developed the famed indore composting process which put the ancient art of composting on a ﬁrm scientiﬁc basis and explained the relationship between the health of the soil, the health of plants and the health of animals (Du and Wang 2001).

Rodale. J. I. began his research and practice on organic farming in the USA. His primary goas was to develop and demonstrate pratical methods of rebuilding natural soil fertility. By 1942, he published the magazine Organic Gardening (Coleman 1989). Lady Balfour started the Haughley experiment the first study comparing conventional and natural farming methods. Her idea inspired the formation of the Soil Association that was founded in 1946 in England.

The Soil Association attempted to return humus and soil fertility to their basic place in the biological balance.

Agriculture and progress association was founded. Mokichi Okada started natural agriculture in 1935 in Japan. His main thoughts were to respect and emphasize the function of nature and soil in the agricultural production and to coordinate the relationship between human being and nature through increasing soil humus to get the yields without fertilizer and agricultural chemicals.

The research and practice of organic agriculture expanded worldwide after the 1960s. In particular, the expansion and dual polarity of organic agriculture started with the oil crisis of 1973 and the growing sensitivity to agro-ecological issues. This was a time of new ideas, signiﬁcant sociological transformations, protest movements and the proliferation of alternative life styles. The new thoughts in terms of using natural resources rationally, protecting the environment, realizing low input and high efﬁciency, ensuring food security, returning to the earth and maintaining a sustainable development of agriculture, such as organic, organic-biological, biodynamic, ecological, and natural agriculture were remarkably developed in their concept reserach and practical activities (Herrmann and Plakolm 1991).

The major organic agriculture association and research insitutions in the world such as FNAB (Federation Nationaled’ Agriculteurs Biologiques) and FiBL (For Schungs Institute Fuer Biologischen Landbau), now the largest organic reserach institute worldwide were founded during 1970s-1980s (Greene 2001). These organizations played an important role in standardizing the production and market of organic products and promoting research and consumer’s awareness.

IFOAM and the Food and Agriculture Organization ot he United nations set out Guidelines for the Production, Processing, Labeling and Marketing of Organically Produced Foods in 1999.  This guide line is of importance to international harmonization of the organic farming and standards (FAO and WHO 2001). Organic farming had rapidly developed worldwide during this stage. The main drivers of steady market and production growth were the commitment of many retail chains as well as favorable policy conditions.

The principle of health

Organic agriculture should sustain and enhance the health of soil, plant, animal, human and planet as one and indivisible.

This principle points out that the health of individuals and communities cannot be separated from the health of ecosystems – healthy soils produce healthy crops that foster the health of animals and people.

Health is the wholeness and integrity of living systems. It is not simply the absence of illness, but the maintenance of physical, mental, social and ecological well-being. Immunity, resilience and regeneration are key characteristics of health.

The role of Organic Agriculture, whether in farming, processing, distribution, or consumption, is to sustain and enhance the health of ecosystems and organisms from the smallest in the soil to human beings. In particular, organic agriculture is intended to produce high quality, nutritious food that contributes to preventive health care and well-being. In view of this it should avoid the use of fertilizers, pesticides, animal drugs and food additives that may have adverse health effects.

Organic Agriculture should be based on living ecological systems and cycles, work with them, emulate them and help sustain them.

This principle roots Organic Agriculture within living ecological systems. It states that production is to be based on ecological processes, and recycling. Nourishment and well-being are achieved through the ecology of the specific production environment. For example, in the case of crops this is the living soil; for animals it is the farm ecosystem; for fish and marine organisms, the aquatic environment.

Organic farming, pastoral and wild harvest systems should fit the cycles and ecological balances in nature. These cycles are universal but their operation is site-specific. Organic management must be adapted to local conditions, ecology, culture and scale. Inputs should be reduced by reuse, recycling and efficient management of materials and energy in order to maintain and improve environmental quality and conserve resources.

Organic Agriculture should attain ecological balance through the design of farming systems, establishment of habitats and maintenance of genetic and agricultural diversity. Those who produce, process, trade, or consume organic products should protect and benefit the common environment including landscapes, climate, habitats, biodiversity, air and water.

Organic Agriculture should build on relationships that ensure fairness with regard to the common environment and life opportunities.Fairness is characterized by equity, respect, justice and stewardship of the shared world, both among people and in their relations to other living beings.

This principle emphasizes that those involved in Organic Agriculture should conduct human relationships in a manner that ensures fairness at all levels and to all parties – farmers, workers, processors, distributors, traders and consumers. Organic Agriculture should provide everyone involved with a good quality of life, and contribute to food sovereignty and reduction of poverty. It aims to produce a sufficient supply of good quality food and other products.

This principle insists that animals should be provided with the conditions and opportunities of life that accord with their physiology, natural behavior and well-being.

Natural and environmental resources that are used for production and consumption should be managed in a way that is socially and ecologically just and should be held in trust for future generations. Fairness requires systems of production, distribution and trade that are open and equitable and account for real environmental and social costs.

Organic Agriculture should be managed in a precautionary and responsible manner to protect the health and well-being of current and future generations and the environment.

Organic Agriculture is a living and dynamic system that responds to internal and external demands and conditions.

Practitioners of Organic Agriculture can enhance efficiency and increase productivity, but this should not be at the risk of jeopardizing health and well-being. Consequently, new technologies need to be assessed and existing methods reviewed. Given the incomplete understanding of ecosystems and agriculture, care must be taken.

This principle states that precaution and responsibility are the key concerns in management, development and technology choices in Organic Agriculture.

Science is necessary to ensure that Organic Agriculture is healthy, safe and ecologically sound. However, scientific knowledge alone is not sufficient. Practical experience, accumulated wisdom and traditional and indigenous knowledge offer valid solutions, tested by time.

Organic Agriculture should prevent significant risks by adopting appropriate technologies and rejecting unpredictable ones, such as genetic engineering. Decisions should reflect the values and needs of all who might be affected, through transparent and participatory processes.